Third Party Funding of Litigation and Arbitration in the BVI

November 9, 2019 Posted by : Martin Kenney Category : Op-Ed Comments Off on Third Party Funding of Litigation and Arbitration in the BVI

Martin Kenney, a world renowned specialist in offshore asset recovery and one of Who’s Who Legal International’s ‘Top Thought Leaders of the Legal Profession’, sheds some light on the curious law of champerty and maintenance, and makes the case for clarification and reform in the BVI.

THIS ARTICLE ORIGINALLY APPEARED IN THE IFC REVIEW 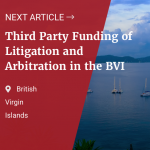 Historically, 11th century common law and statutory rules against what is known as maintenance and champerty acted as a bar to alternative ways of funding disputes. Increasingly however, third party funding is being viewed as an attractive method of financing access to justice, or managing the risks of litigation. The BVI Government has made substantial investments in the development of the BVI Commercial Court (2009), and a new International Arbitration Centre (2016); and should be viewed as the forum of choice for resolving cross-border commercial disputes. Thus, reform regarding the outdated laws of champerty and maintenance is long overdue.

The following will firstly address the law on maintenance and champerty, and its continuing evolution in England and Wales, before turning to the BVI and the need for further clarification and reform.

The Doctrines of Maintenance and Champerty

The law of maintenance can be defined as the use of the financial assistance of a third party to pursue or defend civil proceedings without lawful justification. Champerty is an aggravated form of maintenance whose distinguishing feature is the support for litigation by a stranger, in return for a share of the proceeds.

The social justification for the 11th century English law prohibitions against third party investors taking a stake in litigation, has been “lost in the mists of time”, as one English Lord put it in 1994.[i] In medieval Britain, wealthy barons would frequently corrupt the judicial process by backing baseless claims to land. They were able to do so as the English legal system was, at that time, weak and easily manipulated by the powerful. Rules of evidence and civil procedure did not exist. The judicial process was rough, ready, and often corrupt. However, by the time of the industrial revolution of the 18th and 19th centuries, these rules began to undergo judicial and political criticism as prohibitions which denied the common man access to justice (by preventing him from raising money to pay for it) for no logical or justifiable reason.

As English law developed over time, maintenance and champerty ceased to be criminal offences and torts by the enactment of sections 13 and 14 of the Criminal Law Act 1967. While the legal relics of ‘champerty and maintenance’ persisted in a limited form in England (the 1967 repeal of the associated crimes did not abolish “…any rule of law as to the cases in which a contract is to be treated as contrary to public policy or otherwise illegal“[ii]), the need to improve access to justice for claimants – due in part to the retreat by the modern state from the field of legal aid – has had the effect of eroding what is left of maintenance and champerty to a shadow of its 11th century self.

Gradual Erosion of Champerty and Maintenance

The Courts of England and Wales have, since the early 2000s, endorsed the use of third party funding; finding in Factortame No. 8 [2002] EWCA Civ 932 that only those funding arrangements that tend to “undermine the ends of justice”, should fall foul of the public policy rule against maintenance and champerty.[iii] Such “bad” litigation funding is defined by English case law as instances where a funder “controls” a funded case; or where a funder fails to make provision for its fair share of adverse costs.

In a 2007 report[iv] on litigation funding, the Civil Justice Council (CJC)[v] confirmed that English Courts now regard third party funding as acceptable and in the interests of justice, particularly where the prospective claimant was unable to fund their claim by other means. It concluded that third party litigation funding had been reinforced by the English Court of Appeal’s decision in Arkin v Borchard Lines Ltd & Ors.[vi]  Even though the principle articulated by this case – the ‘Arkin cap’ (where litigation funders are not to be made liable for adverse party costs beyond the value of their funding) – has since been increasingly restricted (most recently in Davey v Money & Anor [2019] EWHC. 997 (Ch)), the general consensus remains that access to justice should not be denied on the basis of scarcity of financed and that the freedom of a claimant to choose to lay off risk to a third-party funder should not be prohibited without good reason.

To summarise, English Courts now permit third party funding in instances where a funder does not ‘control’ the funded litigation; and so long as the funder is prepared and able to pay any adverse costs, including costs awarded on an indemnity basis, incurred by reason of its funding. In the words of Tomlinson LJ in Excalibur [2016] EWCA Civ 1144: “Litigation funding is an accepted and judicially sanctioned activity perceived to be in the public interest.”

Champerty and Maintenance in the BVI

The BVI would benefit greatly from legislative clarification on the doctrines of champerty and maintenance. While criminal liability in respect of champerty and maintenance was abolished in the BVI in 1997, pursuant to section 328 of the BVI Criminal Code, BVI courts have not yet had occasion to fully assess the enforceability of third party funding arrangements under the common law.

A lack of clarity can be seen in the difference between UK and BVI legislation. As seen above, the Criminal Law Act (UK) 1967 expressly preserves the potential for the doctrines of maintenance and champerty to render litigation funding contracts unenforceable under the law of England & Wales, by providing at section 14(2) that the abolition of criminal and civil liability did not affect “…any rule of law as to the cases in which a contract is to be treated as contrary to public policy or otherwise illegal.“[vii] The 1997 BVI Criminal Code provision abolishing the common law crimes of maintenance and champerty contains no such proviso. Arguably, this points to an intention on the part of the BVI legislature to depart from the position taken by Parliament in England & Wales –  but a clarification of the position would foster more confidence in the BVI’s legal system on the part of those who have occasion to use it.

Similarly, BVI courts are governed by the Eastern Caribbean Supreme Court Act (Cap 80) [ECSCA], supplemented by the Legal Profession Act 2015 [LPA]. The LPA repealed section 77 of the ECSCA and introduced new laws with respect to the remuneration of BVI lawyers. Importantly, section 6(2) of the mandatory part of the new Code of Ethics of the LPA (Schedule 4, Part B) provides that: “It is not improper for a legal practitioner to enter into a written agreement with a client for a contingency fee provided that such fee is fair and reasonable”.

Accordingly, BVI lawyers are permitted to charge a contingency fee in exchange for representing a party to an action before the High Court. However, this express sanction from the legislature was not extended to third party funding agreements and it did not expressly abolish the doctrine of champerty and maintenance, insofar as it may still apply to non-lawyer litigation funding in the BVI. Further clarification from the legislature is needed.

Yet it does appear that the attitude towards third party funding arrangements, and as such the doctrines of champerty and maintenance, has relaxed somewhat in the Caribbean. In Hugh Brown & Associates (Pty) Ltd v Kermas Limited [2011] (BVIHCV(COM)), Bannister J was prepared (without deciding the point) to proceed on the assumption that third party funding was permissible. In that case, the presence of a funding arrangement had not been disclosed to the BVI Court. The view, albeit without decided authority, has been that this is a good indication that litigation funding is lawful in the BVI.[viii]

Similarly, a recent decision by Grand Court of the Cayman Islands found in favour of allowing litigation funding in A Company v A Funder [2017] (CILR) FSD 68 of 2017. This judgment, although somewhat useful for taking the Court’s temperature on litigation funding in the Cayman Islands, did little to advance the law. Firstly, it was an ex parte declaratory relief proceeding. Secondly, it concerned the funding of the intended enforcement of a New York arbitration award in the Cayman Islands. As such, what was proposed to be funded was the enforcement of a liquidated debt evidenced by a final award. The doctrine of champerty and maintenance has no application to the sale, assignment or funding of liquidated debt claims at common law. In this regard, the English Court of Appeal held in 1905 that “in all Courts a debt must be regarded as a piece of property capable of legal assignment in the same sense as a bale of goods”viiii. In a similar fashion, so can bills of exchange, accounts receivable, book debts, and final money judgments. Why this case was thought to give rise to a champerty risk in the Cayman Islands is mystifying. Thirdly, what was being sought to be funded was the enforcement of a New York Convention arbitration award; an award which the Cayman Islands is obligated by treaty to honour, unless it is contrary to the fundamental public policy of the Islands. None of these points seem to have been explained to the Court by the applicant.

Notwithstanding this, the applicant sought a declaration that a litigation funding agreement was not unlawful on the grounds of maintenance and champerty. In the judgment, Segal J (following the approach of English law) and the Court found that the funding agreement would be suitable, provided an amendment stated that the funder could not terminate it at will. This was to ensure that the funder did not have an unacceptable level of indirect control over the award enforcement proceedings. It is unclear what jurisdiction the Court had to impose this condition on an agreement to fund the enforcement of a liquidated debt claim embodied in a final award when, again, champerty and maintenance have had no application to such claims for at least 150 years at common law.

The current uncertainty under BVI law as to whether third party funding agreements of bare causes of action or unliquidated claims (which is the claim terrain that champerty and maintenance occupies) are enforceable potentially makes the BVI less attractive as a place to conduct commercial litigation or arbitration. Furthermore, it has the potential to damage the Island’s competitiveness as a leading centre for international litigation or arbitration. It would therefore be useful for the law on champerty and maintenance to be reformed. This notwithstanding, and until a reform statute is enacted, an argument can certainly  be made that BVI courts ought to adopt the modern English common law model (developed by the English Court of Appeal in Factortame and Arkin), by permitting responsible third-party funding to flourish under judge-made rules of reason.

Based on the 2009 introduction of a dedicated Commercial Court, its reputation as having a rational and stable legal system, and its aspiration to make the new BVI International Arbitration Centre a leading centre for international arbitration, the BVI is aware of the practices and business requirements of commercial parties. Clarifying the law on champerty and maintenance, and thus confirming the lawfulness of third party funding in the BVI for both international litigation and arbitration, will allow international businesses and individuals to more confidently use the funding tools available to them in the market – thus promoting the BVI’s growth as a leading venue for international commercial dispute resolution.

Martin Kenney Martin Kennedy is a world renowned specialist in offshore asset recovery and one of Who’s Who Legal International’s Top Thought Leaders of the Legal Profession. He is currently a Managing Partner at Martin Kenney & Co. Solicitors in the British Virgin Islands. 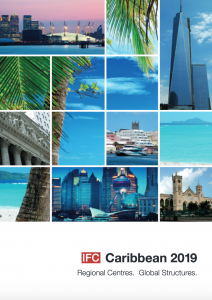