Unless active steps are taken by law enforcement, by building and deploying multi-disciplinary teams of asset recovery professionals, the list of wilful defaulters will increase

On December 31, 2016, Finance Minister Arun Jaitley informed Parliament that there was a total of 9,130 wilful defaulters who collectively owed banks in the region of Rs 91,155 crore (or approximately $14 billion). This large portfolio of wilful default is a key challenge facing India today. This culture of wilful defaulters frustrating the banking and law enforcement authorities shows no sign of abating.

On February 14, the public was alerted by the Punjab National Bank that Nirav Modi and his affiliates had allegedly defrauded it of $1.17 billion. When federal agencies stepped in, it emerged that Modi and his associates were no longer in India. It is fair to conclude that unless active steps are taken by law enforcement to respond to such occurrences, by building and deploying multi-disciplinary teams of asset recovery professionals, the situation is likely to deteriorate further.

This episode drew a stern response from finance minister Arun Jaitley, who said: “With regard to lack of ethics that a faction of Indian business follows, it is incumbent on us as a State, till the last legitimate capacity of the State, to chase these people to the last possible conclusion to make sure that the country is not cheated.”

Sustained economic growth is dependent on a sound banking system. Changing the culture of tolerating wilful defaulters requires robust government regulation, tied with targeted policy interventions. This is conducive to attracting and retaining foreign capital and to maintaining the nation’s solvency and security as a whole.

When a culture of wilful default is allowed to permeate, the government is required to intervene and recapitalise banks at a substantial cost to the public exchequer.

There is no quick remedy to fix a problem of this scale and complexity. 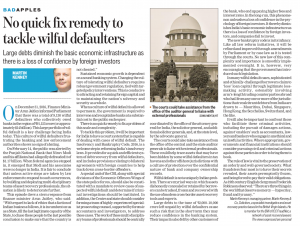 To tackle this problem, it will be important for India to have a court system that is capable of dealing with cases of wilful default. The Insolvency and Bankruptcy Code, 2016, is a welcome step in reforming India’s insolvency laws. It provides for a quick and efficient system of debt recovery from wilful defaulters, and includes provisions relating to bilateral agreements with foreign countries to help track down cross-border offenders.

A special unit of the CBI, along with special divisions of the Economic Offences Wings of the state police forces, should also be constituted with a mandate to review cases of suspected wilful default and determine if criminal investigations should be instituted. In addition, the Centre and state should consider forming a team of highly-experienced specialist prosecuting counsel, supported by forensic accountants and investigators, to address these cases. The work of these multi-disciplinary teams of professionals should be centrally coordinated by the office of the attorney general for India, the solicitor general, and additional solicitor generals, and, at the state level, by the advocate general.

The courts could also take assistance from the office of the central and the state auditor generals to liaise with external professionals. These could help trace assets that may have been hidden by some wilful defaulters in tax havens and other offshore jurisdictions with a culture of protection over the confidential nature of bank and company ownership records.

Wilful default is not a uniquely Indian problem. There are myriad ways in which assets dishonestly concealed or retained by borrowers can be tracked, frozen and recovered with the use of modern cross-border asset recovery tools and experts.

Large debts to the tune of Rs 2,000–10,000 crore left unpaid by wilful defaulters cause such a risk that in the short term they may reduce confidence in the banking system. Their impact is also felt by other customers of the bank, who end up paying higher fees and interest rates. In the long-run, this phenomenon unleashes a loss of confidence in the psychology of foreign investors. It thereby diminishes India’s basic economic infrastructure as there is a loss of confidence by foreign investors, and companies fail to invest (to expand).

The new bankruptcy code is in its infancy. Like all law reform initiatives, it will be refined and improved through amendments by Parliament or by case law as it is tested through the courts. No new law of this complexity and importance is smoothly implemented overnight. It is, however, very encouraging that the government has introduced such legislation.

In many wilful default cases, sophisticated and ethically-challenged borrowers claim to lose loan capital through legitimate loss-making activity, ostensibly involving arm’s-length trading counterparties abroad who hail from any one or more of the jurisdictions that recalcitrant debtors from India are drawn to — Mauritius, Dubai, Singapore, Hong Kong, the Seychelles, Switzerland, and the like.

It will also be important to confront those who facilitate these criminal activities, including the pursuit of damages actions, against ‘enablers’ such as accountants, lawyers and bankers who engage in unethical and unlawful activities. Where appropriate, governments and financial institutions should consider pursuing civil and criminal actions against these parties in order to bring them to book.

The rule of law is vital to the preservation of an orderly and well-governed society. What fraudsters fear most is to have their secrets revealed, their assets peremptorily frozen, and being forced to pay their valid obligations. As 19th century English clergyman Frederick Robinson observed: “There are three things in the world that deserve no mercy — hypocrisy, fraud and tyranny.”

The views expressed are personal

This article originally appeared in The Hindustan Times